The keys to power－Graphene & Catapult Structure

In 2013 VICTOR has introduced a high-performance attack badminton racket, the TK-8000. This racket gives impressive explosiveness, a firm frame and a solid strike-feel. The head-heavy design adds to the user’s smash power, letting many players feel the formidable destructive power of this racket.

Many people have asked just what is the secret of the TK-8000. The racket’s powerful attacking performance comes from two technologies newly-developed by VICTOR-graphene and catapult structure. 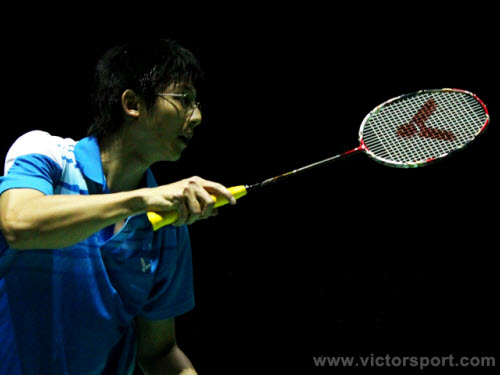 Graphene is the lightest and thinnest high-tech material in the world and harder than diamond. The two dimensional hexagonal carbon ring made up of carbon atoms has good physical properties. Just one gram of light, rigid, bend-resistant graphene can bear five tons of weight.
VICTOR uses graphene at points three and nine on the racket, bringing into play its high hardness characteristic to greatly increase the rigidity of the racket, helping the player efficiently transfer swing power to striking effect and reducing energy transfer loss. This is why TK-8000 delivers unprecedented attack power and solid feel.

VICTOR has placed two troughs on the underside of the racket frame at points five and seven, using the bricole (large ancient catapult) concept of ancient battles; this is the catapult structure design.
Under normal circumstances, when the racket hits the shuttlecock it will distort and begin to store up rebound energy. The TK-8000’s catapult structure is based on the design concept of “storing more energy”. The catapult structure store up energy and then instantly release it, making the racket act like a bricole. It stores up the power of the player’s swing and then transfers a large amount of energy to the shuttlecock when it is hit; the shuttlecock is like a rock thrown by a bricole, propelled powerfully by a large amount of energy to strike down the enemy.
The TK-8000’s catapult structure helps players deliver more destructive smashes. Tests by VICTOR’s R&D team proved that the catapult structure effectively convert potential energy to kinetic energy; and in comparative tests against other brands, the TK-8000 delivered 9.75% more rebound effect.
In summary of the above explanation, the secrets to the power of the attack-type TK-8000 are grapheme and catapult structure. Graphene plays the role of force transmitter, through smooth energy transmission increasing strike power and solidity of feel; the catapult structure is then responsible for storing and then releasing energy, to allow powerful and well-directed perfect smashes to be delivered.
( Edit by VICTOR Badminton )

The RESULTS of Sudirman Cup